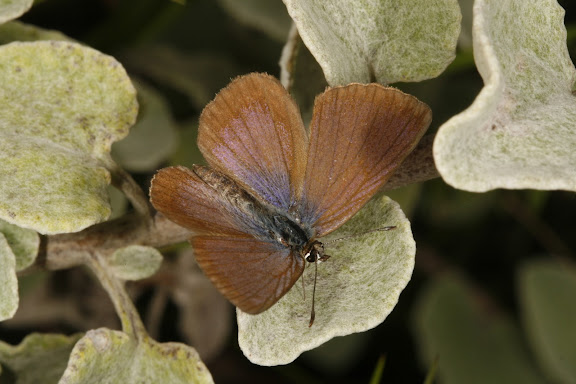 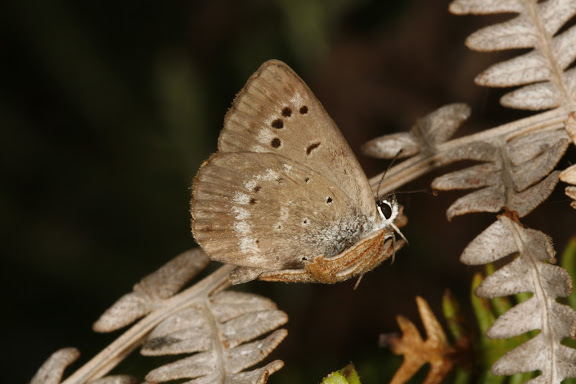 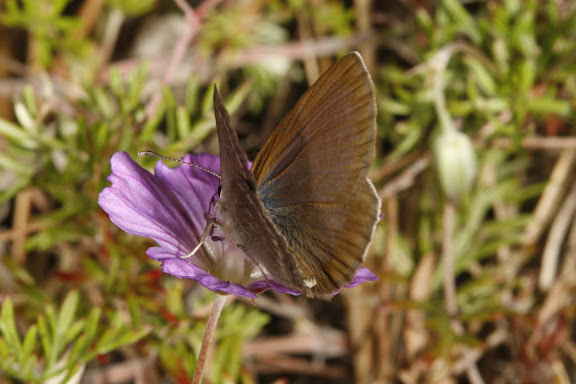 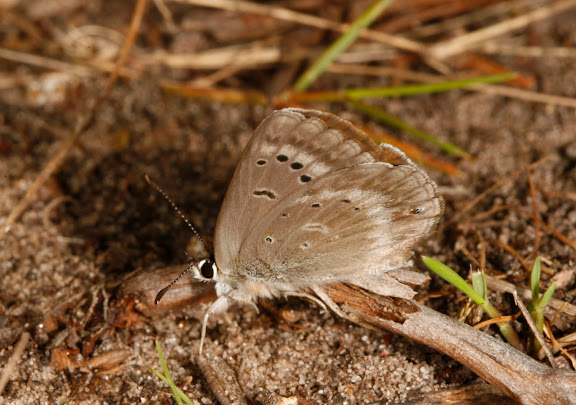 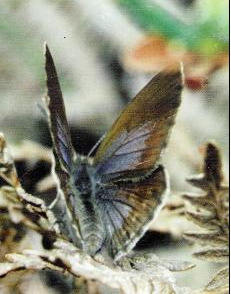 The Brenton Blue butterfly, Orachrysops niobe (TRIMEN, 1862) is currently only known to be extant at one locality in the southern Cape (the Brenton Blue Butterfly Reserve = BBBR), and is globally Red Listed as “Critically Endangered”. It became an icon of the conservation movement in South Africa during the 1990s after a colony of the near-extinct butterfly was found at Brenton-on-Sea on a site proclaimed for property development. An intensive publicity campaign by the Lepidopterists’ Society and local environmental activists galvanised several NGO’s and private individuals, led by the Endangered Wildlife Trust, to form the Brenton Blue Trust (BBT) in 1994, with the principal aim of conserving the butterfly. Negotiations with the developer and pressure on government at all levels eventually caused the then Minister of Environment Affairs Dr Pallo Jordan to invoke the Environment Act to prevent destruction of the habitat, followed by expropriation. The BBT finally achieved its primary objective in July 2005 when the BBBR was proclaimed as a Special Nature Reserve falling under the control of CapeNature, assisted by a management committee with representatives from WESSA, the Lepidopterists’ Society, Brenton Ratepayers Association, Knysna Municipality, and the Endangered Wildlife Trust, and whose aim is to manage the BBBR in a sustainable fashion to ensure the long-term survival of the butterfly.

A scientific research programme, commenced in 2000, resulted in a PhD thesis by Dave Edge being accepted by North West University, Potchefstroom. This research investigated the life history and ecological interactions of O. niobe and recommended management techniques for the BBBR.

Life history of the Brenton Blue 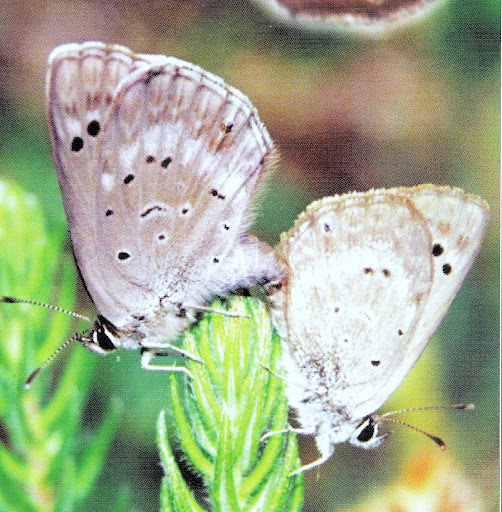 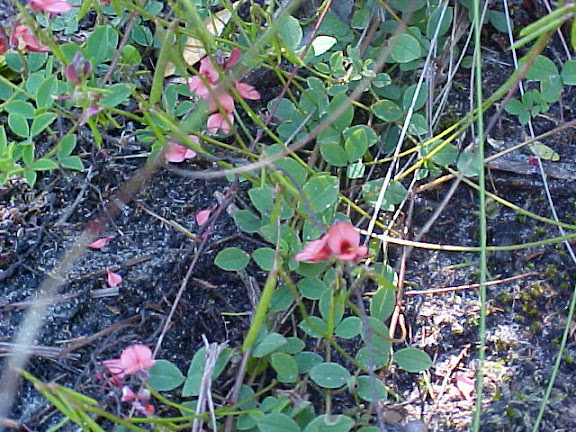 After mating (Figure 2), the female adults locate the host plants Indigofera erecta Thunb. (Figure 3) visually and lay their eggs singly on the underside of the leaves (Figure 4), close to the ground. Frequently one or more females oviposit many times on the same plant. The 1st and 2nd (Figure 5) larval instars feed on the leaflets of the host plant, making characteristic feeding grooves (Figure 6). Cannibalism takes place in the early larval stages to eliminate excess larvae. 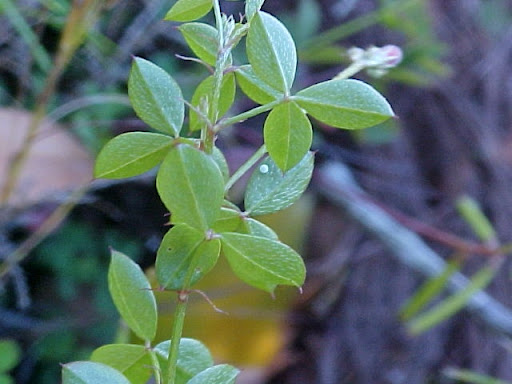 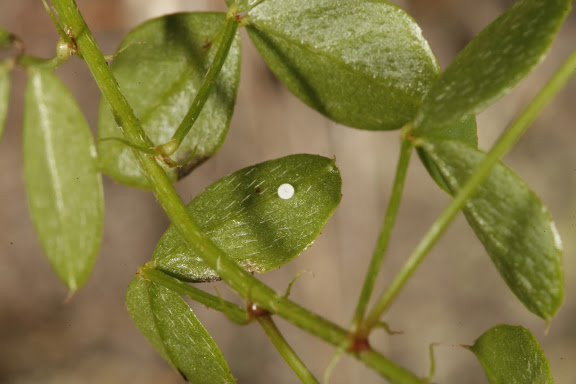 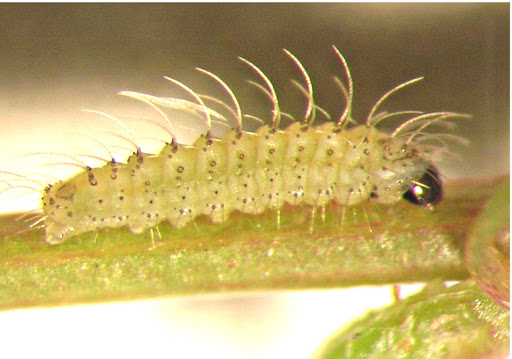 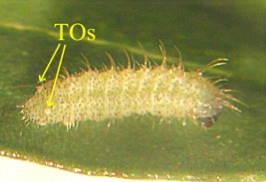 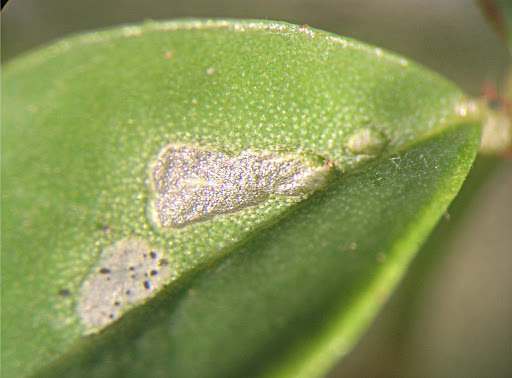 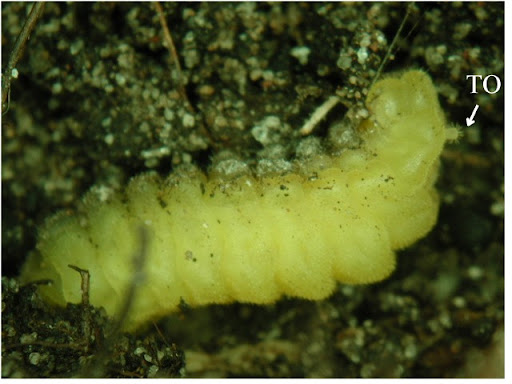 The surviving 3rd instar larvae descend to the base of the host plant where they burrow underground to feed on the woody rootstock, attended by ants Camponotus baynei ARNOLD, 1922 (Figure 8). The final (4th) instar larvae (Figure 7) continue feeding on the rootstock until they are ready to pupate underground. After eclosion, the adult butterflies crawl to the surface. First brood adults emerge from late October – early December, with a second brood from late January to early March, and occasionally a third brood during April. 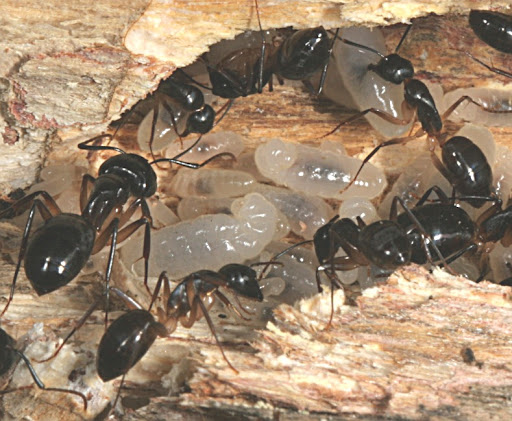 O. niobe is a polyommatine (blue) of the Lycaenid butterfly family, many of whose species have a variety of ant interactions (myrmecophily). The specific nature of the myrmecophilous behaviour of O. niobe was established by field observations and captive rearing. The larvae have a tough skin and spines (for defence), tentacle organs (TOs – see Figures 5 and 7) to emit ant pheromones, and a nectar organ (exuding a desirable substance to appease the ants). C. baynei ants are thereby induced to tend and protect the larvae from predators and assist them with excavating around the rootstock of the host plant. Larval growth patterns of O. niobe were compared to other polyommatines, and it was demonstrated that rootstock feeding accelerates growth in the later instars. Contrary to what occurs in the closely related genus Lepidochrysops the larvae of O. niobe do not enter the ant nests to feed on the ant brood. Evidence is presented that the ant relationship of O. niobe, predominantly with C. baynei, is nonetheless essential for successful breeding.

The ant communities at the BBBR, the Nature’s Valley Fynbos Reserve (NVFR) and Uitzicht 216/ 40 (a previously burnt site near Brenton with a good host plant population) were sampled by pitfall and bait traps, and striking differences were found. The host ant C. baynei, only occurs in the unburnt parts of the BBBR, and not at all at the other two sites. This may be because C. baynei nests in dead wood lying on the ground, which is destroyed during a fire. The Argentine ant, a potential threat to indigenous ant communities, was not found at any of these sites, since it prefers habitats close to human disturbances.

Egg and adult butterfly counts were used to study the population dynamics of O. niobe. The egg counting method was highly labour-intensive and impractical to use regularly. Two methods of visual adult counting were devised, after rejecting the mark/release/recapture method, which could adversely effect the butterfly population. Both visual counting methods yielded relative counts, but by calibration the actual adult butterfly brood populations were estimated (see Figure 9). The recent decline in the population at the BBBR could be a result of poor rains in the critical growing period for the host plant (August – October).

A population dynamics model was constructed using life history data, incorporating several factors impacting fecundity and mortality. It was concluded that the principle mortality factors (overcrowding on the host plant and larval cannibalism) were density dependent, stabilising the population at a level dependent on the number of healthy host plants available, provided that sufficient host ant populations exist in the vicinity of these host plants.

Biology and population dynamics of the host plant Indigofera erecta

The morphology, reproductive biology and autoecology of the papilionoid legume I. erecta were described. Of the three Indigofera found at the BBBR, only I. erecta has smooth leaves whereas the other species are hirsute and unpalatable to the larvae of O. niobe. Microhabitat variations at different sites where I. erecta occurs cause changes in its vegetative morphology (e.g. larger, tougher leaves) and may affect larval palatability.

I. erecta only occurs on south facing slopes close to the sea and subject to coastal mists. I. erecta performs best in partial shade, under trees with a high canopy or in an open space adjacent to shading shrubs. It reproduces by resprouting from its woody rootstock or by growing from seed. The mature plants (2 years old) produce copious flowers that are pollinated by a guild of small bees. The seeds develop in legume pods, and are dispersed by explosive dehiscence, casting the seeds up to 2 metres from the parent. There is negligible secondary seed dispersal. Consequently populations persist in favourable locations for long periods. Experiments showed that germination is induced by moisture and light – heat had little effect.

Recruitment of I. erecta is most favoured when open space becomes available and competition is reduced. Fire is the most radical disturbance producing these conditions and prolific recruitment occurs post-fire in patches where the plant has been dormant as seed or underground rootstocks. Within a year or so post-fire most of these new plants expire as vigorous competitors such as bracken fern (Pteridium aquilinium) and asteraceous plants (e.g. Cullumia decurrens) usurp the space. Less radical and repeated disturbances, such as the activities of browsing megaherbivores, are more effective in sustaining I. erecta populations. The cutting and maintenance of a network of paths at the BBBR simulates browsing and this has caused an increased I. erecta and therefore O. niobe population (see Figure 9). 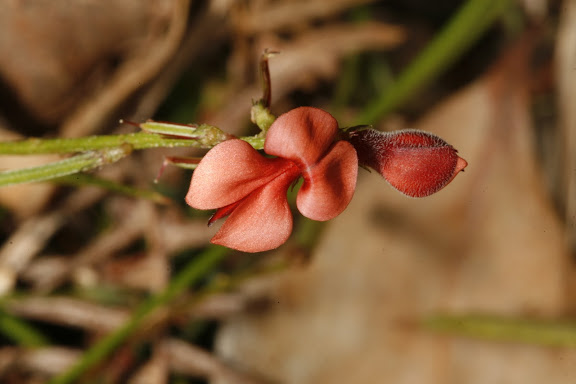 Vegetation communities at the BBBR

The vegetation at the BBBR is a mosaic of (predominantly) dune thicket and moist dune fynbos, of which c. 20% was burnt in October 2000. Braun Blanquet methodology was used to sample and classify the vegetation types at the BBBR, and ordination techniques were used to confirm the classification and to diagnose for environmental gradients (none were detected). I. erecta occurs mostly in just two thicket vegetation types – with Pterocelastrus tricuspidata (Candlewood) and Ficinia ramosissima (a sedge) as the dominant species. A census of all candlewoods and all the I. erecta plants at the BBBR revealed that 83% of the I. erecta plants were growing within the crown cover of a candlewood. By contrast I. erecta was virtually absent from fynbos dominated vegetation types and from burnt areas.

The three study sites are described and the ecological history of the region was reconstructed. Sea level changes during the late Pleistocene were instrumental in generating the current landforms. Ecosystem functioning has changed since the advent of man, because natural fire regimes and free roaming megaherbivores no longer play a dominant role.

The range of O. niobe has been dramatically altered and reduced following the inundation of the continental shelf by rising sea levels since the end of the last ice age. Moreover O. niobe’s requirement for a cool, moist climate makes it vulnerable to the current global warming trend. The residual suitable habitat has been further reduced by coastal property development and general environmental degradation (alien infestation and loss of ecosystem function). An increased population of O. niobe at the BBBR, and the establishment of new populations at suitable sites are judged to be essential to avert extinction. 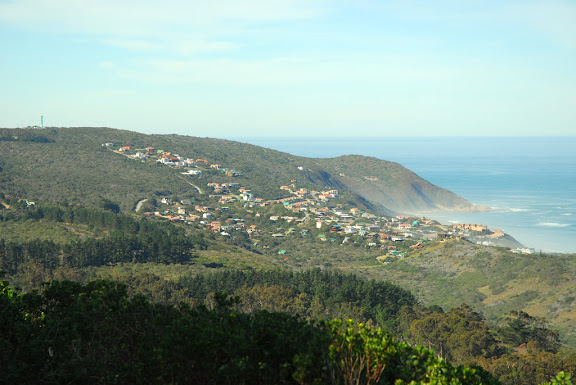 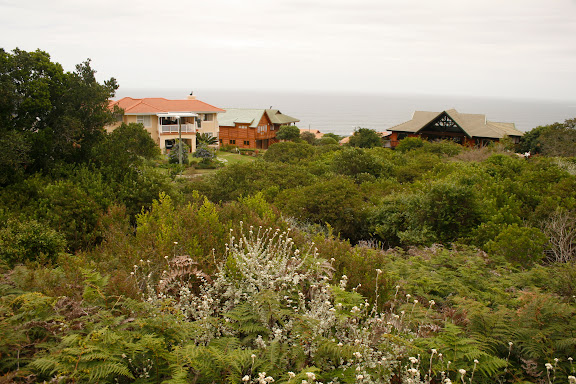 Management policies at the BBBR

The principal management technique discovered during the research and used at the BBBR is the cutting and maintenance of paths to simulate herbivore activities. Along these paths the host plant I. erecta grows, a delicate plant that can easily be damaged by trampling. The public is therefore only allowed access into the BBBR with the permission of CapeNature. Disturbance of the reserve in any way or the collection of the butterflies is also strictly prohibited and is closely monitored, with the neighbours of the BBBR playing an active role.

Alien plants in the reserve such as Acacia cyclops (Rooikrans) and Acacia melanoxylon (Blackwood) are actively controlled. Kikuyu grass (Pennisetum clandestinum), growing on road verges and in gardens bordering the reserve, is being eradicated and replaced with non-invasive indigenous grass species, with the co-operation of the owners of properties bordering on the reserve.

An ecological audit of the BBBR has recently been done.

Re-introduction of the Brenton Blue to Nature’s Valley

Establishment of new populations of O. niobe is receiving high priority. Since the butterfly originally occurred at Nature’s Valley, a re-introduction is being attempted by CapeNature, LepSoc and the Nature’s Valley Trust (NVT). The reasons that the butterfly died out in the early 1970’s are not entirely clear, but they probably included destruction of some of its habitat for housing developments, and transformation (overgrowth) of the remaining habitat through lack of fires and the reduction of grazing and browsing animal activities. Fortunately part of the Brenton Blue’s original habitat at Nature’s Valley is conserved in a Fynbos Reserve (NVFR). Following restoration of the fynbos at the reserve (through a planned fire in April 2003 organised by CapeNature) to a more healthy condition, the host plant of the butterfly (I. erecta) enjoyed a renaissance for a few years but is now unfortunately in decline.

An ant survey during 2005 found that the ant C. baynei, had not yet become re-established after burning of the reserve. Nonetheless, a re-introduction was attempted through release of caterpillars in early 2006, but no adults emerged during the succeeding twelve months. Efforts are continuing, and establishment of a viable population of C. baynei at the Fynbos Reserve is being given priority this year. Botanical experts are investigating how the population of I. erecta could be expanded and made more sustainable. The prospects of successfully re-introducing the Brenton Blue are still reasonable. However the programme is threatened by the Bitou Municipality’s plans to sell the Fynbos Reserve to a developer to build a hotel. These plans are being strongly opposed both by the NVT and the BBT. 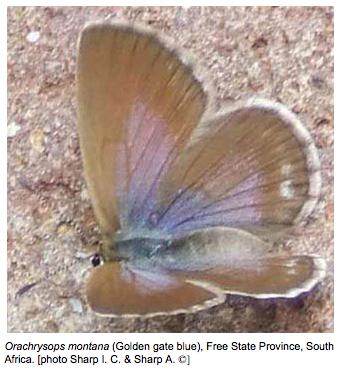 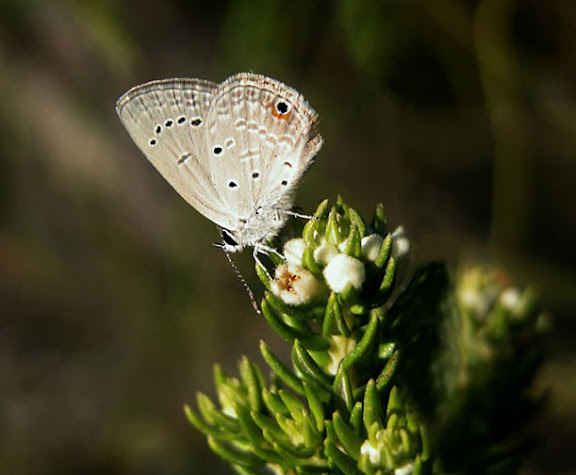 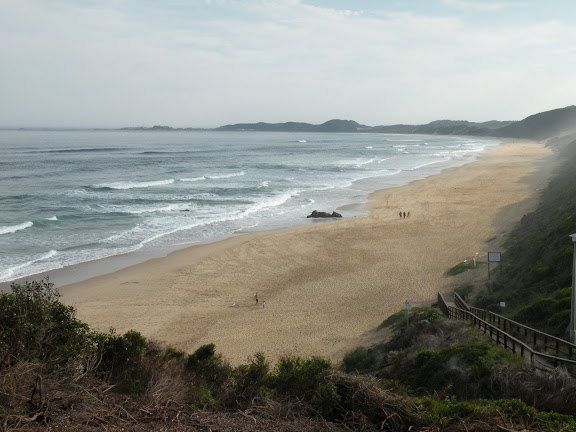 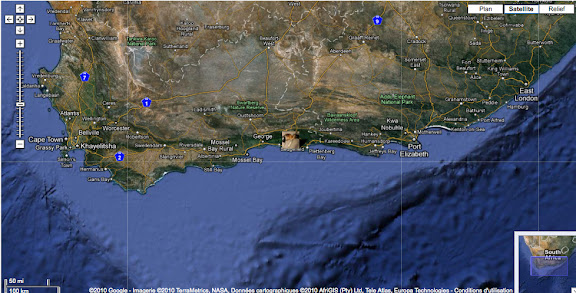 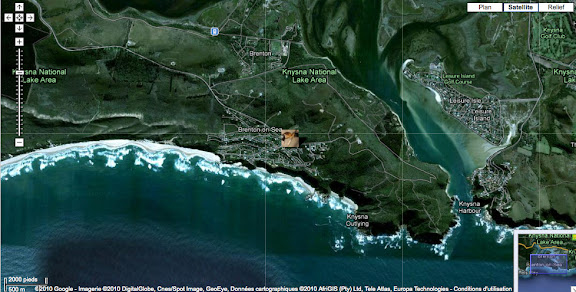 Some observations on Behaviour of Delias Imagos